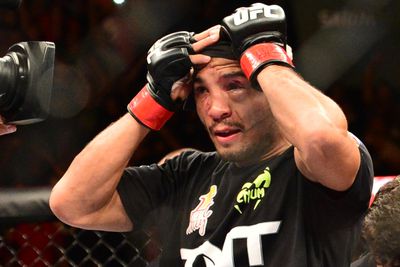 That hasn’t stopped Ultimate Fighting Championship (UFC) featherweight No. 1 contender Conor McGregor from running off at the mouth every chance he gets. So much so, that division champion Jose Aldo has enlisted undefeated 145-pound rising star Jonas Bilharinho to throw hands and talk shit during training camp.

The results (via Bloody Elbow) speak for themselves.

“(I talked trash) a lot. A lot. Never ever ever did anyone try to talk to Aldo during fights, and I am 100 percent sure that Conor will. He’s going to try to make Aldo’s good strikes look foolish. So every single leg kick that Aldo gets (on me), every punch, every good strike, I tell Aldo, ‘No Aldo, you’ve got nothing. What do you got for me, Aldo?’ I was talking to Aldo during training and he lost his mind! He lost his mind and I said to him ‘man, you’ve got to focus, you’ve got to concentrate.’ But his evolution is absurd. Every single training, he’s a monster. Now he doesn’t lose focus at all when I’m cursing at him. Now I can curse his mother, and he will do nothing. He will keep calm and stick with the strategy. He’s a beast.”

A guy like “Speed” can come in handy these days.

Aldo will get a chance to test his newfound resolve at the upcoming UFC 189: “Aldo vs. McGregor” pay-per-view (PPV) event, where he defends his strap against the “Notorious” Irishman on July 11, 2015 inside MGM Grand Garden Arena in Las Vegas, Nevada.