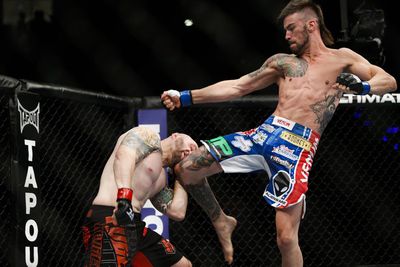 An injury to John Hathaway has resulted in a short-notice reshuffling of UFC 189’s fight card. With Hathaway out, welterweight prospect Brandon Thatch now steps up to fight Gunnar Nelson on the event’s main card, while John Howard squares off against streaking Irishman Cathal Pendred. FOX Sports first reported the news.

Thatch (11-2) and Nelson (13-1-1) are considered to be two of the welterweight division’s most promising prospects, though both are hoping to rebound after recently suffering their first UFC loss. Thatch debuted with back-to-back first-round wins over Justin Edwards and Paulo Thiago before stumbling to former lightweight champion Benson Henderson, while Nelson saw his four-fight UFC win streak snapped in a split decision loss to Rick Story last October.

Howard (22-11), meanwhile, has dropped three straight fights inside the Octagon, including a first-round TKO to Lorenz Larkin this past January. He’ll look to right his ship against Pendred (17-2-1), a teammate of Conor McGregor’s who has racked up a perfect 4-0 UFC record since fighting on The Ultimate Fighter 19.

UFC 189 takes place at the MGM Grand Garden Arena in Las Vegas, NV. An updated UFC 189 fight card can be seen below.