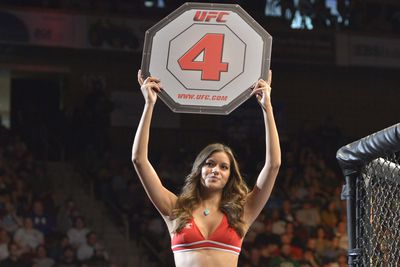 The UFC 190 fight card is now complete with the addition of a pair of TUF Brazil 4 finals.

The reality show, that had its last episode aired Sunday night on Globo in Brazil, will feature Dileno Lopes vs. Reginaldo Vieira for the 135-pound crown and Fernando Bruno vs. Glaico Franca for the lightweight trophy.

UFC 190 takes place Aug. 1 at the HSBC Arena in Rio de Janeiro, Brazil, and airs live on pay-per-view. TUF Brazil 4 finals were initially set to take place at UFC Fight Night 70 in Hollywood on June 27, but were moved to UFC 190 due to visa issues.

Lopes (18-1) earned his spot in the final after a three-round decision over Matheus Nicolau. Vieira (12-3), who was eliminated from the show after losing to Matheus Mattos via decision in the elimination round, returned after Giovanni Santos was pulled from the show with an injury, and tapped Bruno Rodrigues to advance to the final.

In the lightweight division, Glaico Franca (12-3) scored a first-round submission over Joaquim Silva in the semifinal, while Fernando Bruno (15-2) defeated Bellator veteran Nazareno Malegaria via decision, after three rounds, to become the second finalist.

The UFC has yet to announce if TUF Brazil 4 finals will air on the pay-per-view portion of the card. Antonio Rodrigo Nogueira, Mauricio Rua and Antonio Rogerio Nogueira, who coached the TUF Brazil 4 season in Las Vegas, will also compete in Rio de Janeiro. “Shogun” meets “Minotouro”, while “Minotauro” takes on Stefan Struve.