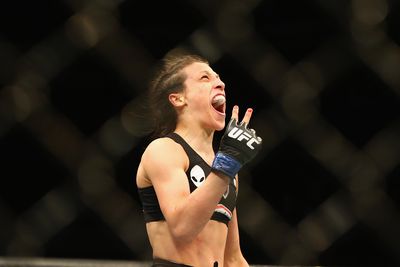 Bloody Elbow recaps the main event from UFC 69 last night in Berlin, Germany. Here, we look at the title fight between Joanna Jedrzejczyk and Jessica Penne

On Saturday night, UFC Berlin took place at the O2 World in Berlin, Germany and was headlined by a strawweight world title bout between former Invicta FC champion Jessica Penne and the current, undefeated UFC champion Joanna Jędrzejczyk. With the undercard lacking starpower, the UFC really needed the main event to provide a memorable performance and through Joanna Jędrzejczyk, they got just that.

Official Result: Joanna Jedrzejczyk def. Jessica Penne via TKO (strikes) at 4:22 of round 3 to remain the UFC Women’s Strawweight Champion

What was the high point of the fight?

This fight once again illustrated the striking brilliance of Joanna Jedrzejczyk. Jessica Penne throughout her career has proved that she is as tough as nails, but Jedrzejczyk completely neutralised all of her offence, through slick footwork and varied combinations. The high point of the fight was the superb elbow landed in the second round, which caused a massive laceration to the bridge of Penne’s nose.

Where do these two go from here?

Joanna Jedrzejczyk’s next challenger will likely be decided at UFC 190 when Jessica Aguilar takes on Claudia Gadelha. Jedrzejczyk previously fought Gadelha to a razor tight split decision at UFC on FOX 13, which many media members scored to Gadelha. Should Aguilar somehow get by Gadelha, she too provides an interesting stylistic match-up with the champ.

Jessica Penne is a victim of the UFC’s lack of female weight classes. Penne is best as an atomweight fighter, but unfortunately has been forced to bulk up by 10 extra lbs to compete inside the Octagon. It’s clear that we are unlikely to see Penne at her best in a division where she is always going to be outsized by her opponents.

Now. Joanna Jedrzejczyk’s striking was a thing of beauty.