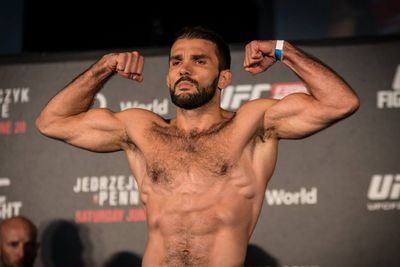 After Sergio Moraes pulled out of his fight at UFC Berlin, Peter Sobotta doubts, the Brazilian BJJ world champion was ever really injured.

Last Saturday’s UFC Berlin event had to deal with multiple injury-related cancellations and late replacements, both on the preliminary and main portion of the card. One of the fighters affected was German BJJ blackbelt Peter Sobotta, who was originally scheduled to meet multiple-time BJJ world champion Sergio Moraes on the evening’s main card. But after Moraes cited an injury, Sobotta ended up facing — and dominating — overwhelmed replacement Steve Kennedy from Australia. After this second UFC win, Sobotta still wants the much higher profile fight against the Brazilian Moraes.

“We tried two times to put that fight together, it didn’t work out”, Sobotta told GNP1.de after his fight on Saturday. Originally, the bout was scheduled for UFC Krakow in April, but back then it was Sobotta, who pulled out with an injured ankle. The matchup was set for a second time at UFC Berlin, but this time Moraes pulled out due to an undisclosed injury.

“My sources tell me that he was never injured in the first place”, said Sobotta. “He didn’t want the fight, wasn’t hungry enough or whatever. I don’t know. Maybe he simply shit his pants. I hope he will get his shit together and has the courage to get in the ring with me. I mean, he is injured, but posted a picture of him training today. That doesn’t fit. It’s sad, but maybe we can still do the fight someway down the road.”

Bloody Elbow couldn’t find a Twitter post by Moraes containing a picture of himself during training. He did, however, post one on his Facebook on Friday, where he poses with his team after a training session. Moraes has yet to respond to the accusations made by the German welterweight.