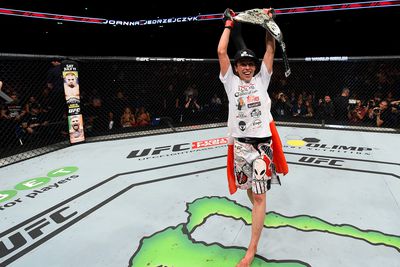 When it comes to violence, business is booming for Joanna Jedrzejczyk. The Polish destroyer pocketed her second straight post-fight bonus for her bloody defense of her strawweight title at UFC Fight Night 69 on Saturday night, sharing ‘Fight of the Night’ honors with challenger Jessica Penne.

Jedrzejczyk dominated Penne in every aspect of the fight, stuffing a majority of the former Invicta FC champion’s takedowns, battering Penne with a wide array of strikes, then finishing her in the third round with a series of brilliant salvos against the cage. Both Jedrzejczyk and Penne earned $50,000 bonuses for their performances.

The night’s other two bonuses went to Mairbek Taisumov and newcomer Arnold Allen.

Taisumov knocked out the previously undefeated Alan Patrick with a blistering head kick followed by punches on the night’s undercard, while Allen staged an improbable third-round rally and choked out Alan Omer to capture his first UFC win.