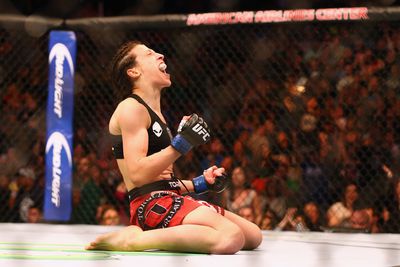 UFC women’s strawweight champion Joanna Jedrzejczyk outclassed No. 3-ranked contender Jessica Penne in the main event of UFC Fight Night 69 this past Saturday (June 20, 2015). Earning her first UFC title defense with yet another (technical) knockout victory, MMAmania.com ponders what could be next for “Joanna Champion.”

Those were the words of warning from Ultimate Fighting Championship (UFC) women’s strawweight title holder Joanna Jedrzejczyk this past Saturday (June 20, 2015) in her post-fight interview following her savage beatdown over Jessica Penne in the main event of UFC Fight Night 69 in Berlin, Germany.

“Joanna Champion” sent a startling message to the entirety of the 115-pound division with her impeccable performance on UFC Fight Pass. Jedrzejczyk mangled Penne’s mug with a vicious barrage of strikes, utilizing every limb available to her in order to massacre her opponent’s face.

See that here if you dare.

Had Penne not been as tough as she is, Jedrzejczyk would have finished the fight in the first round. Instead, the beating was extended for another 10 minutes of violence, littering the Octagon with blood, and terrifying onlookers worldwide.

Referee Marc Goddard finally put an end to the onslaught at 4:22 of the third round.

After easily taking out both Carla Esparza and Jessica Penne in back-to-back fights, Jedrzejczyk is quickly blossoming into a major star that UFC brass must capitalize on.

“Nobody’s going to take this title from me.”

The charismatic champ is not only incredibly talented, but she is sly, frightening, and confident beyond all measure.

With the 115-pound women’s division only about a half-year old, Jedrzejczyk has already taken out the No. 1 contender in Esparza, the No. 2-ranked Claudia Gadelha, and No. 3-ranked Jessica Penne.

So what could be next for the dominant Polish champ?

The options are truly endless as there is currently not a single clear-cut No. 1 contender, but the most likely scenario is Jedrzejczyk battling the winner of the upcoming strawweight bout pitting Gadelha against UFC debutant and longtime strawweight great Jessica Aguilar, at UFC 190 in August.

If that is truly the case, Jedrzejczyk probably wouldn’t be back inside the Octagon until November at the earliest.

If the champ wants to get back inside the cage sooner, UFC brass could rocket budding star Paige VanZant up the ladder to a title shot, or a dark horse candidate could rise through the ranks if Maryna Moroz is given the crack at the title.

After yesterday’s hellacious beatdown, it seemed Jedrzejczyk was laboring her right hand a bit, so no title fights can be announced until any injury is fully healed.

For now, simply enjoy Jedrzejczyk’s handiwork, and prepare to witness her rematch Gadelha or take on Aguilar sometime later in the year.