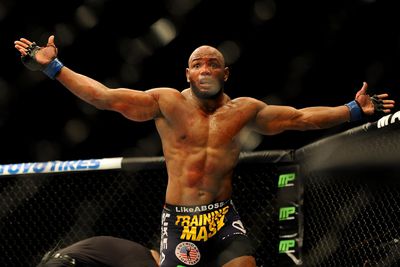 Romero was brought into the UFC went Strikeforce merged as something of an afterthought. Romero had lost his sole Strikeforce bout and he was already well into his 30’s. Nonetheless, the Cuban defector has managed to quickly rise into UFC’s Top 10 and announce himself as a title contender.

For the most part, Romero has done this with his greatly improved — and still improving — kickboxing ability. Of his five UFC wins, “The Soldier of God” has knocked out four of his opponents.

Now, let’s take a closer look at the Cuban’s talents and see how he stacks up against the Karate master ahead of their Middleweight main event at UFC Fight Night 70 this weekend in “Sunshine State.”

Under the kickboxing coaches of American Top Team (ATT), Romero has developed a unique and highly dangerous style of striking. Utilizing sudden bursts of aggression, Romero is able to routinely catch his opponents off-guard.

Using his kicking ability and other distance strikes to keep his opponents uncomfortable, Romero will switch up his tempo by exploding forward into a power punch, usually his left hand.

The big benefit to this tactic — besides high accuracy — is that it allows Romero to conserve energy. As a heavily muscled 38 year old, Romero cannot afford to throw every punch and kick at full speed. If he expended himself at such a high pace, he’d slow down heavily unless he scored a knockout almost immediately. It also helps that Romero stays incredibly relaxed at all times.

By fighting this way, Romero has been able to keep his power deep into fights, even if he has fatigued a bit.

While at range, Romero feints quite actively to disguise his attacks. Before long, he’ll begin finding his range by using his kicks. Romero mixes it up quite well, throwing both round house kicks and more flashy techniques, such as side kicks, hook kicks, and teeps.

Out of the Southpaw stance, Romero can deliver seriously hard round kicks. After throwing out a lot of feeler kicks, Romero will slam home round kicks to the legs, body and head. When Romero does commit to those strikes, he really knocks his opponent around.

In addition to the feints and kicks, Romero will throw punches towards his opponents’ legs. These can be mistaken for takedown attempts and help set up Romero’s overhand. Above all else, they help keep his opponent hesitant.

For the most part, Romero relies heavily on his left hand. Like his kicks, he’ll throw it out at half-speed more often than not. Then, Romero will leap into a long cross or overhand, covering a surprising amount of distance.

One of Romero’s favorite combinations is to start with a lead outside leg kick to the calf or ankle. As the strike lands, Romero will step down, ensuring he has the outside angle and potentially tripping his opponent. From that position, Romero can follow up with his left hand.

Despite the fact that Romero’s right hand mostly gauges distance and occupies his opponent’s lead hand, Romero will occasionally attack with the right hook. In fact, his drubbing of Tim Kennedy actually began when “Soldier of God” followed up his lead leg low kick-left hand combination with a crushing hook.

Another big part of Romero’s game is punishing his opponents’ attempts to close the distance. While he can do that with takedowns, he uses counter strikes more often. Once Romero’s opponent runs into a few strikes — assuming he’s still awake — it really derails any pressure-based game plan and allows Romero to keep his pace.

For example, Romero’s UFC ended in the form of a flying knee knockout. As Clifford Starkes shot in for a takedown (or feinted with a level change, it’s unclear), Romero leaped into the air in an incredible display of timing and athleticism.

More recently, Romero used a counter elbow to perfect effect against Brad Tavares. The Hawaiian was looking to recover from a terrible first round in which Romero manhandled him, and he was actually having some success putting Romero on his back foot to start the round. Then, Romero lined up an elbow as Tavares ran in, stunning him and opening a wide cut.

Following this strike, Tavares’ aggression faltered, and Romero was able to control the rest of the round without issue.

Defensively, Romero is pretty good in the pocket at deflecting and slipping punches while he’s fresh. While that skill deteriorates a bit as he slows down, his biggest issue is backing straight up. The threat of the takedown has largely kept his opponent from tying together long combinations and taking advantage of this flaw, Tim Kennedy wasn’t worried about that part of his opponent’s game and made him pay.

One of the most credentialed wrestlers in UFC, Romero secured a silver medal in the 2000 Olympics. While he doesn’t always rely on those skills inside the Octagon and has surely declined since then, he’s still proven to be an absolutely incredible takedown artist.

For the most part, Romero looks for to blast his opponent away with a double-leg takedown. Like with his left hand, Romero springs into the takedown with no warning with amazing speed. When Romero really drives into a takedown with all his physical ability, it really doesn’t matter what his opponent was doing at the time.

He’s going for a ride.

In the clinch, Romero is simply able to manhandle his opponents. He simply overpowers his opponent, pushing him around, dragging him to the mat, and easily lifting grown men into the air. Perhaps his favorite throw is something of an outside trip from the over-under, which Romero notably used against Tavares a few times. After pushing his opponent’s leg out of position with his own, Romero twists his body towards his opponent’s weakened side.

Another rarely seen wrestling move in Romero’s arsenal is the ankle pick. Romero will drop down for the clinch to grab at his opponent’s ankle, which isn’t unheard of, but he’s also managed to simply pluck his opponent’s foot up from the kickboxing range.

Frankly, I don’t have the wrestling ability or athleticism necessary to understand how this is possible, but “The Soldier of God” somehow makes it work.

Romero isn’t impossible to take down simply because he stays so relaxed on his feet. However, none of his opponent’s have had any success holding him down, as Romero simply pushes his opponent away and jumps to his feet.

Unless his Romero is badly gassed and faced with an extremely talented wrestler, don’t expect him to spend more than a few seconds on his back.

Oddly enough, Romero hasn’t been very successful at holding his opponent to the mat after landing the takedown. Usually, his opponent is able to work back to his feet in about a minute or so. That, combined with his general focus on knocking the shit out of people, has left us without much insight on Romero’s jiu-jitsu ability.

And I don’t think we’ll see much of the Olympian’s guard game any time soon.

However, Romero did use the kimura a few times against Tavares. Tavares gamely looked to wrestle with Romero, hunting for the single leg takedown. He managed to get into good position a couple times, but Romero would lock up the figure four grip on his opponent’s inside arm and wrench his foe over. It wasn’t exactly technical jiu-jitsu, but Romero was able to power through and reverse position.

At one point, it even landed him in the crucifix.

At this point, it’s proven that Machida has an issue with wrestlers who can kick. While Romero may struggle to implement his kicks against a fellow Southpaw, he should still battle Machida at range and keep him wary. In addition, Romero can use his kicking game to herd Machida into the fence.

From there, the takedown should open up.

In a pure striking match up, this would be an interesting challenge for both men, as Romero’s charges would collide with Machida’s counter punching. That’s a battle either man could win, but Machida’s experience on his feet would likely give him the advantage.

However, Romero’s wrestling background can easily switch things up. After being taken down, Machida seems to lose some faith in his overall game and becomes rather hesitant. It doesn’t matter if Romero can keep his foe on the mat, as a few early takedowns can really shake up the fight.

Will Yoel Romero take another step towards the title or will Lyoto Machida return to the win column?