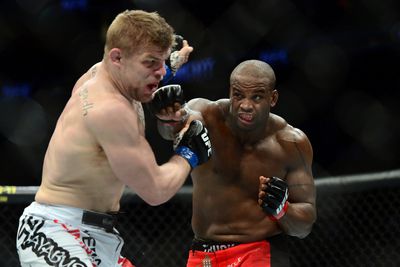 Antonio Carlos Junior and Eddie Gordon will scrap this Saturday (June 27, 2015) at UFC Fight Night 70 inside Seminole Hard Rock Hotel and Casino in Hollywood, Florida. In a match up of The Ultimate Fighter (TUF) winners, what adjustments must be made for either man to claim victory? Find out below!

Carlos Junior tore through The Ultimate Fighter (TUF): “Brazil” at Heavyweight, finishing three of his opponents and earning a clear decision at the Finale. While he stumbled against his opponent’s wrestling in his Light Heavyweight debut, Carlos will take another drop here.

Gordon, a fellow TUF winner, has struggled since his Octagon debut. While his most recent decision loss was more than arguable, it still was a fairly ugly performance either way. “Truck” definitely needs to impress in this scrap.

Let’s take a look at the keys to victory for both fighters:

Antonio Carlos Junior
Record: 4-1
Key Wins: Vitor Miranda (TUF Brazil 3 Finale)
Key Losses: Patrick Cummins (UFC Fight Night 58)
Keys to Victory: An excellent Brazilian jiu-jitsu player — both on the mat and in the cage — Carlos Junior has finished three of his fights via submission. He’s not helpless on his feet either, as the Brazilian knocked out two of his opponents on TUF.

In this bout, Carlos Junior needs to stay off his back and keep active. He’s a young fighter with dangerous finishing ability, and he needs to capitalize on it. Otherwise, his opponent will be able to control him to a decision victory, not unlike Cummins.

When put in the clinch, Carlos Junior needs to focus all his energy and escaping back to the center. Even if he fails, it will make his opponent work, and Gordon has a habit of slowing down considerably as fights wear on.

If Gordon gets tired or sloppy against a finisher like Carlos Junior, it’s likely game over.

Eddie Gordon
Record: 7-3
Key Wins: Dhiego Lima (TUF 19 Finale)
Key Losses: Josh Samman (UFC 181), Chris Dempsey (UFC on FOX 15)
Keys to Victory: Despite some legitimate knockout power, Gordon largely looks to wrestle his opponent and control him with his physical strength. This has produced some mixed results, as Gordon is tough enough to out-grind his opponent but leaves plenty of openings as he slows down.

Rather than immediately try to drag his foe to the mat, Gordon should look to work from the clinch. His opponent is not really a wrestler, so Gordon should be able to control him without much issue from that position.

In addition to shutting down his opponent’s superior kicking game, keeping Carlos Junior in the clinch will ensure that Gordon is close enough to punch. “Truck” has heavy hands and could save himself plenty of trouble by connecting with some big punches early in the fight.

Even if he doesn’t secure a knockout, it will really help him set up future shots.

At some point, Gordon will look for the takedown. That’s a sound strategy, as Carlos Junior is far too willingly to fight from his back. If Gordon can pin his opponent’s head against the fence, that should nullify most of his submission attempts, giving the New York-native a chance to control his opponent, do damage and rest.

Bottom Line: This is very likely do-or-die for Gordon. And the stakes are fairly high for Carlos Junior, too.

Prior to dropping down to 185 pounds, Carlos Junior was looked at as one of the 205-pound division’s brighter prospects. He’s just 25 years old, already has some top-notch ground skills, and the rest of his game is developing well. Despite all that, if he starts his UFC career winless (0-2), he’ll lose whatever attention winning TUF earned him.

On the other hand, a victory here secures his position as a fighter to watch. At middleweight, it’ll take more time to build momentum, but that’s not necessarily a bad thing. After all, the Brazilian has only had five professional fights so far.

“Truck” needs this win. He may not have deserved to lose his last fight, but he was hardly fighting the cream of the crop either. If the Serra-Longo-trained fighter tastes defeat once more, his current UFC run is at its end.

Alternatively, a win awards him some much needed job security. In addition, it could serve as a major turning point if he manages to dominate or finish his opponent.

At UFC Fight Night 70, Antonio Carlos Junior and Eddie Gordon will clash in a must-win battle for both fighters. Which man will have his hand raised?