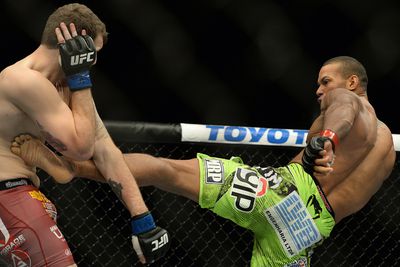 Thiago Santos and Steven Bosse will go to war this Saturday (June 27, 2015) at UFC Fight Night 70 inside Seminole Hard Rock Hotel and Casino in Hollywood, Florida. In a match up of dangerous strikers, what adjustments must be made for either woman to claim victory? Find out below!

An Ultimate Fighter (TUF) Brazil contestant, Santos is still looking for consistency inside the Octagon. He’s alternated wins and losses thus far, but at least his wins have come in decidedly violent fashion.

Bosse likely has the strangest UFC career of 2015. After being pulled out of retirement as a short-notice replacement to fight Fabio Maldonado, Bosse was put back on the bench when “Rampage” Jackson managed to win his court battle. Since then, Bosse has decided to remain active and drop a weight class, and we’ll see how that all goes on Saturday.

For now, let’s take a closer look at the keys to victory for both men:

While Santos looked a bit overwhelmed in his debut — both by his opponent’s aggression and by the infamous Octagon jitters — but he’s looked like a quality addition to the roster since then. At 31 years old, he probably but won’t develop into a contender, but this is a perfect example of the type of fights Santos will find himself in.

It’s sure to be exciting either way.

Of the two fighters, Santos is the cleaner kickboxer, so he should look to keep this fight at range. Considering how effective his body kick has been — it’s finished both of his UFC wins — Santos should definitely look for that striker here as well.

Body shots have taken out many hard-nosed brawlers.

If and when Bosse tries to pressure him with punches and close the distance, Santos cannot freeze up like in his debut. Instead, he just needs to circle off and return to his range.

Steve Bosse
Record: 10-1
Key Wins: Houston Alexander (Instinct Fighting 1), Marvin Eastman (MFL 2)
Key Losses: None
Keys to Victory: Known as bit of a brawler in his professional hockey days, Bosse turned that aggression into a successful mixed martial arts (MMA) career. Having finished all but one of his victories, Bosse will look to continue his finishing streak here.

Bosse is not a sloppy fighter, but he’s definitely a scrapper. He’s not looking to have a technical kickboxing battle with his Brazilian foe, nor should he. Instead, the Canadian should look to close the distance and rough his opponent up inside the phone booth.

In close, Bosse can work his dirty boxing and utilize his dangerous elbows, which actually earned him a knockout a few years back. Plus, it will nullify his opponent’s kicking game, which is by far the best aspect of Santos’ attack.

Additionally, if Bosse forces an inside fight early and hunts for the finish, he can potentially put off any questions of his cardio. Since Bosse is in his 30s, is dropping a weight class, and hasn’t fought in two years, it’s unlikely that conditioning is his strong suit.

With his power, he just needs some early connections to score a finish and avoid all that.

Bottom Line: Neither fighter is likely to make a significant impact on the division, but they can put on some fun fights.

While there’s nothing wrong with being an action fighter who frequents the middle of cards, both men need some consistency and highlight reel wins. Otherwise, a pair of sudden losses could result in a quick release. If they’re first able to acquire some fan recognition and a reputation for exciting fights, some extra leniency will be awarded.

This is especially true for Bosse, considering no one really knows just how devoted he is to fighting professionally.

While defeat doesn’t affect either man’s ability to climb the rankings — simply because neither man is really doing that — it can threaten their job security. Both fighter’s should be safe after this fight, but things start to get shaky if either man loses two in a row this early in his career.

At UFC Fight Night 70, Thiago Santos and Steve Bosse will slug it out. Which fighter will remain standing when the dust settles?