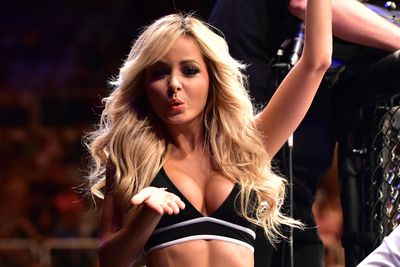 Thanks to the United States visa system apparently running on Windows ME, 12 of the fighters scheduled to compete at UFC Fight Night 70, which takes place at Seminole Hard Rock Hotel and Casino in Hollywood, Fla., this Saturday night (June 27, 2015) were unable to compete, turning what was once the stacked The Ultimate Fighter (TUF): “Brazil 4″ Finale into a top-heavy mess.

Luckily, when Ultimate Fighting Championship (UFC) hits “Sunshine State” this weekend, it will still have an intriguing Middleweight bout between Lyoto Machida and former Olympian Yoel Romero at the helm. In addition, the FOX Sports 1-televised main card will also feature a fun Welterweight clash between knockout punchers Lorenz Larkin and Santiago Ponzinibbio.

With only nine total fights, there won’t be anything on Fight Pass this week. Instead, the five-fight main card will take place on FOX Sports 1 as already mentioned and the four undercard “Prelims” matches will air on sister station, FOX Sports 2.

Here’s what’s in store for the latter:

Alex Oliveira (11-2-1) gave himself some big shoes to fill by embracing the nickname “Cowboy,” but the Brazilian has done Cerrone proud in his two short-notice UFC performances. He very nearly defeated blue-chip prospect Gilbert Burns in his Octagon debut before suffering a late submission, then became the first man to submit K.J. Noons in almost 13 years in May.

He’s scored eight knockouts as a professional and gone the distance just once in victory, against TUF: “Brazil 3″ competitor Joilton Santos.

For his first five fights, Joe Merritt (6-0) cut through ludicrously overmatched competition, facing three men without a professional win and two with horrid records. He finally stepped up in Dec. 2014, where he knocked out 4-1 Steven Ciaccio under the RFA banner.

He stands two inches taller than Oliveira at 6’1.”

If there’s any justice in the world, Merritt should get his rear-end handed to him. His record is a product of corrupt promotions like Xplode Fight Series and Gladiator Challenge (the latter of whom, I might add, let 0-2 Dillon Woods fight three weeks after getting knocked out by Merritt). He’s got one real win and I’d love nothing more than for him to get a dose of reality.

Luckily, there’s nobody like a “Cowboy” to dispense justice.

While I haven’t seen any recent footage of Merritt, Oliveira is such a massive step up and has proven so effective on short notice that it’s hard to imagine him losing this. Expect the Brazilian to earn his third win of 2015 with his eighth first-round knockout.

Leandro Silva (17-2-1) began his second UFC run under the radar, losing a close fight to Francisco Trinaldo before choking out the freefalling Charlie Brenneman last November. He finally got his name in the news in March, though not in the way he would have liked, as he lied to the referee about Drew Dober tapping to a guillotine in a win that was eventually overturned to a no-contest.

He owns 10 submission wins … all by form of choke.

Lewis Gonzalez’s (10-1) undefeated record and probably quite a few brain cells went up in smoke last August courtesy of a vicious knee to the head from Luis Palomino. In Dec. 2014, he managed to re-enter the win column with a narrow decision over UFC veteran and Team Alpha Male representative Justin Buchholz, raising his World Series of Fighting (WSOF) record to 2-1.

Of his five submission wins, three are due to punches.

To be frank, I’m not really impressed with either of these two. Silva’s well-rounded and physically powerful but lacks any standout skills, while Gonzalez really didn’t impress me against Palomino, showing limited striking and poor setup of his takedowns. Plus, while I don’t have footage of the fight, his win over Buchholz was apparently less-than-definitive.

I think I’ll just go with the Brazilian.

Silva’s physical strength should allow him to shrug off Gonzalez’s long-range shots and he ought to be able to handle himself on the feet. I don’t expect either man to find much success in the takedown department, but Silva should control enough of the grappling to earn a close decision win.

Steve Montgomery (8-2) joined his American Top Team compatriots on TUF 21, intending to do his part in beating down the rival Blackzilians. Unfortunately, “The Creepy Weasel” was forced off the show before he could fight when a weight cut mishap caused a violent seizure that sent him to the hospital.

Sims’ eight-fight win streak came to a halt in Oct. 2013 when he lost a split decision to eventual UFC competitor Drew Dober. He rebounded by knocking out James McCall in the second round, his seventh victory by form of knockout.

The Coloradan ordinarily fights at 155 pounds and will step up in weight for this bout.

Occasionally, before I start watching tape and doing research, I’ll catch myself deciding the winner in advance and dealing with confirmation bias based on name value. This was the case here, with Montgomery’s appearance on TUF and his massive height advantage. After watching their recent fights, though, I came to a realization.

Sims has some crisp, powerful hands and a solid wrestling game. Montgomery may have the length, but he doesn’t seem to know how to use it. He was getting tagged by some flat-out ugly punches from the much shorter Brock Jardine and he simply can’t afford that against a puncher of Sims’ caliber.

Still, Montgomery did wind up winning that fight with a crushing knee and his finishing ability should not be underestimated. In terms of overall skill, though, Sims has enough of an edge that even his size disadvantage isn’t enough to dissuade me.

He blows out “The Creepy Weasel” late in the first round.

Danny Martinez (16-6) first made a bid for UFC stardom on TUF 18, where “The Gremlin” lost to Davey Grant via armbar in the elimination round. He’s since lost twice in UFC to Chris Cariaso and Scott Jorgensen.

The 38-year-old — who has knocked out eight opponents — generally competes at Flyweight, but will be stepping up due to short notice.

Like Martinez, Sweden’s Sirwan Kakai (11-2) also tried out for TUF 18 and, also like Martinez, came up short in the elimination round against Chris Beal. Back in the professional world, he’s lost just once since his debut and scored 10 finishes, most recently a late submission of previously-unbeaten Joseph Barajas under the Titan FC banner.

Despite being just 25, he’s been a professional fighter for more than seven years.

I really don’t want to sound too mean, but Martinez just isn’t very good. He swings wild haymakers, shoots for takedowns, and doesn’t really have any interplay between those skills. Said takedowns aren’t even that effective … especially at 135 pounds. Kakai is the better technical striker by a huge margin and also has the defense to avoid getting clipped.

This fight basically boils down to whether Kakai can stay on his feet. With Martinez coming up in weight and often struggling to hit takedowns even at 125 pounds, I expect he’ll be able to. The Swede picks him apart on the feet for a comfortable decision win.

Look, I’m not going to even try to defend this one. Lyoto Machida vs. Romero is a great fight and Lorenz Larkin vs. Santiago Ponzinibbio is going to be fun while it lasts; however, this card sucks.

But hey, it’s free … and it’s not Kmbo Slice vs. Shamrock. That’s worth something, right?

Remember that MMAmania.com will provide LIVE round-by-round, blow-by-blow coverage of the entire UFC Fight Night 70 fight card, starting with the FOX Sports 2 “Prelims” matches online, which are scheduled to start at 8 p.m. ET, right on through the FOX Sports 1 main card, which is slated to start at 10 p.m. ET.