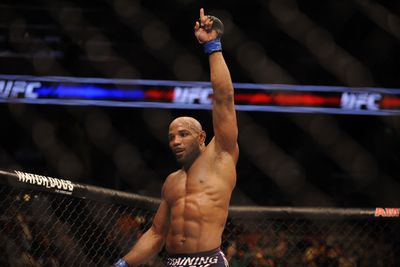 Ultimate Fighting Championship (UFC) returns stateside this Saturday night (June 27, 2015) with the UFC Fight Night 70 event, featuring a main event pitting top-ranked middleweight contenders against one another as Lyoto Machida takes on Yoel Romero. We here at MMAmania.com took a gander at the fight card, and put together five burning questions heading into this weekend.

Ultimate Fighting Championship (UFC) will cap off eight straight weekends of events with a major whimper this Saturday night (June 27, 2015), as the Hard Rock Hotel and Casino in Hollywood, Florida, plays host to UFC Fight Night 70.

A card that was once slated to be The Ultimate Fighter (TUF): “Brazil 4″ Finale has been cut off at its knees due to visa issues for the Brazilian fighters (more on that here).

The event will now feature only eight fights, and leading the way is a consequential 185-pound main event that features former light heavyweight champion Lyoto Machida taking on No. 6-ranked middleweight Yoel Romero.

The rest of the card, well, is not as enticing.

With another “Fight Night” event slated to go down this weekend, MMAmania.com pondered “Five Burning Questions” for the Hollywood shindig.

5. Why didn’t UFC cancel this card and re-schedule the fights?

This card has gone through more changes than Bruce Caitlyn Jenner.

First it was the event being moved from Brazil to Florida, then visa issues forcibly removed TUF finalists, the co-main event between Rick Story and Erick Silva was lost, and several other bouts fell by the wayside, as well.

With less than a week to go before the event, a handful of bouts still hang in the balance, and UFC officials literally scraped the bottom of the barrel to add two new fights on less than a week’s notice.

The event will now move forward with only eight fights, as the rest of the scratched bouts have been moved to other events in the near future.

With so many bumps in the road leading to UFC Fight Night 70, you have to wonder why UFC didn’t cut its losses and just re-schedule every fight for upcoming events.

“Machida vs Romero” would have fit wonderfully as the UFC 190 co-main event, and the rest of the card could have been spread out over a number of different fight cards.

If one more fight is lost over the next several days, it may be the final nail in the coffin for the ill-fated UFC Fight Night 70.

4. Who else is excited to finally watch Steve Bosse?

We have all waited years to see this moment!

The Tristar Gym product boasts an impressive 10-1 record in MMA, but opted to retire from the sport just about a month after UFC announced his initial signing.

Then came the short notice call from Dana White this past April.

Bosse was set to step in on just days notice into the UFC 186 co-main event, replacing the legendary Rampage Jackson against Fabio Maldonado in his home country of Canada.

The opportunity was too big for Bosse to pass up, but when Rampage was cleared to return to action just days later, the Canadian was pulled from the card, and his Cinderella story was yanked out from under him.

Thankfully for all of us waiting on pins and needles to see the former Hockey enforcer lace up his gloves and throw down, “The Boss” will enter the cage this weekend against Thiago Santos.

This is going to bee too fun!

Most fighters who lose three straight inside the Octagon are cut from the UFC roster, but Lorenz Larkin was given one more chance when he opted to make the drop down to 170 pounds.

And boy did it pay off.

After a scintillating first round knockout over John Howard this past January, “The Monsoon” returns to action in the co-main event of UFC Fight Night 70 this weekend.

Facing off against fellow dangerous striker Santiago Ponzinibbio, Larkin has another opportunity to put on a striking clinic in a featured bout that could potentially catapult him up the welterweight rankings.

It is important to remember that only three years ago, Larkin defeated current UFC welterweight champ Robbie Lawler in both men’s final Strikeforce appearance.

If Larkin gets through Ponzinibbio in violent fashion this weekend, I would not be shocked to see the savvy striker taking on a ranked opponent his next time out.

Could a Lawler rematch be in store in the not-too-distant future?

2. Can TUF 21 product Steve Montgomery pick up a victory in his UFC debut on short notice?

If you have been watching TUF 21, then you will remember Steve Montgomery.

If you haven’t been watching TUF 21… Well, I don’t blame you.

“The Creepy Weasel” was involved in one of the scarier moments in the show’s history, as the American Top Team (ATT) product had a terrible weight cut prior to his fight on the show, leading to a massive seizure that forced UFC to ask him to leave the house.

During the episode, Dana White noted that if ATT’s head coach truly believes Montgomery deserves a spot on UFC’s roster, he will get his opportunity in the near future.

Of course, before UFC signed the scrappy welterweight, they wanted to first see him make the 170-pound limit on the local scene.

Montgomery was slated to fight twice on the regional circuit, but ultimately, neither bout came to fruition.

His first scheduled bout post-TUF 21 was cancelled just hours after the weigh-ins, and then his next bout — a main event at Odyssey Fights — was scrapped when UFC called him up to the big leagues on just a week’s notice to face fellow UFC debutant Tony Sims at UFC Fight Night 70.

No matter the circumstances, Montgomery is ironically the first fighter from TUF 21 to get a crack inside the Octagon, and with four finishes in his last five fights, it should be interesting to see what “The Creepy Weasel” brings to the table on fight night.

1. A fight that matters: Can Yoel Romero earn a title shot by defeating Lyoto Machida?

Lyoto Machida is unquestionably one of the greatest fighters in MMA history, having fought and defeated several other MMA legends, while having his fair share of tough losses to incredible foes.

Unfortunately for Yoel Romero, he will get his hands on “The Dragon” just one fight too late, as Luke Rockhold’s violent finish over the former light heavyweight champ essentially stole all of the spotlight in the middleweight division.

In fact, Rockhold’s performance was so impressive, it earned him a shot at UFC champion Chris Weidman, leaving Ronaldo Souza and Yoel Romero on the outside looking in.

The most logical scenario would have been to match up “Jacare” and “Soldier of God,” but after that fight was scrapped on two separate occasions due to illnesses and injuries, UFC brass decided to go a different route altogether.

Now, instead of a clear cut No. 1 contender bout, Romero will have to try and eclipse or equal Rockhold’s nearly impeccable performance over Machida in order to sway UFC matchmakers to give him the next shot over “Jacare.”

While Souza still has yet to find a dance partner, a sixth straight UFC victory will all but cement him as the next man in line to face off against the winner of the Weidman vs Rockhold title fight.

Sorry Romero, but that is how the cookie crumbles.