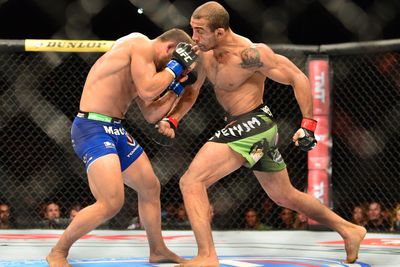 The big news out of the UFC is of course Jose Aldo’s reported fractured rib. While he’s not officially out of the UFC 189 main event vs. Conor McGregor, prospects of this highly anticipated featherweight title fight going on as scheduled look bleak. As you could imagine, MMA fighters on Twitter had plenty to say, with several featherweights offering to fight McGregor on short notice. Check out the reactions:

If it makes dollars it makes sense. Put me in coach! @danawhite https://t.co/V8RJoogr9f

Hey @ufc @seanshelby- We’re calling for a reason. We hear Aldo is hurt. You know I will bring it. Let me fix the problem w/ the Irish clown.

If Jose is out I’m willing to step in and beat @TheNotoriousMMA again!! @ufc @danawhite

I don’t have a bitch bone in my body, if I did I cut it out!

I’ll step up and fight McGregor at #ufc189 #OperationMENACE

It sucks that when @TheNotoriousMMA wins the title, people will be saying he didn’t beat a 100% Aldo. Can’t please the haters.

Well, stealing the show at Vegas fight weekend may have just gotten a bit easier.. Although if I had to guess, Aldo toughs it out. #ufc189

In times of crisis, this man child looks to the Simpsons for strength. Pray for #UFC189 pic.twitter.com/xfLDZMYdP2

As an adult I just learned Santa isn’t real. All I asked for Christmas was Aldo vs McGregor #UFC

Wait who the fu*# is Conor?

Lastly, he’s not a fighter, but he is the UFC president, and Dana White sent out this two-worded Tweet of assurance to the fans: