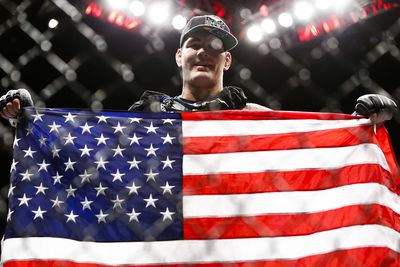 RIO DE JANEIRO — The head of the UFC in Brazil wants Chris Weidman defending his title in his country.

With six of his 13 MMA wins coming against Brazilians, the UFC middleweight champion will defend his title next against countryman Luke Rockhold, but Giovani Decker, general manager of the UFC in Brazil, wants to see the “Brazilian Killer” putting his title on the line in Brazil.

During the UFC 190 media day in Rio de Janeiro, Decker told the press that his dream match-up for a soccer stadium event at Maracana would be a title bout between Weidman and a Brazilian.

“Chris Weidman against Vitor (Belfort) or Lyoto (Machida) or Anderson (Silva) or (Ronaldo) ‘Jacare’ (Souza) at a sold-out Maracana,” Decker said. “It would be the ‘Brazilian Killer’ feeling how is it like to fight at Maracana. Why not?”

Weidman, who has already defeated Belfort, Machida and Silva in the Octagon, faces Luke Rockhold in a yet-to-be-announced event.

“If Lyoto beats (Yoel) Romero, he’s back in the line, and we’ll see what happens with Anderson, and we can’t forget about Thales Leites. It’s a division full of Brazilians. We have to recognize that Weidman is a phenom, but a sold-out Maracana would be tough for him,” Decker said.

The UFC is scheduled to return to Brazil on Aug. 1, with UFC 190 taking place at Rio de Janeiro’s HSBC Arena with Ronda Rousey vs. Bethe Correia as main event. According to Decker, the UFC returns to the country next in late September, with location yet to be determined, and early November, likely in Sao Paulo.

With the June 27 UFC Fight Night card moved from Sao Paulo to Hollywood, Fla., Decker admits that it’s tough to put on great cards every time they do an event in Brazil, but is working on building new stars while headlining events with popular names.

“Fans always want to see their idols, Vitor, Anderson, (Daniel) Cormier, Jon Jones, and sometimes he misses a great prospect that can become an idol in the future,” he continued. “We see fighters with huge potential of becoming champions. I understand the fan, and we’re listening to the fan. We’re bringing famous fighters, but we also want to make these young fighters famous as well.”