UFC to announce official date for return to Ireland on July 1, 2015 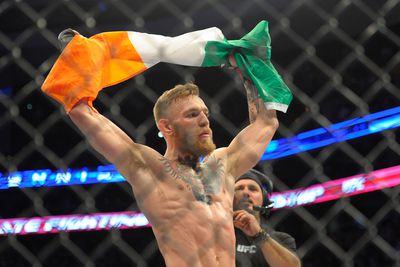 If you stage the event, they will come.

Ultimate Fighting Championship (UFC) quickly found out that it had another mixed martial arts (MMA) hotbed after a successful return to Ireland last July as UFC Fight Night 46 as the event — which took place in Dublin — sold out in a matter of minutes.

Of course, it didn’t hurt that Conor McGregor was headlining the Fox Sports 1 televised event.

Now, the promotion is gearing up for a return to Irish country, as UFC executive Dave Allen, revealed during the UFC Fight Night 59 press conference (replay here), that the company already has a date set. However, the details will not be revealed until July 1, 2015.

“The date is set, and we’ll announce details on July 1,” Allen said via MMA junkie.

While details are still being kept under wraps, you can bet UFC would love to bring Conor back to main event another fight in his homeland.

It would be even sweeter for everyone involved, I’m sure, if McGregor happens to dethrone UFC featherweight kingpin, Jose Aldo, when the two go toe-to-toe at UFC 189 on July 11, 2015 in Las Vegas, Nevada.

In fact, UFC president Dana White already revealed that should “Notorious” win the title, his first defense will be in Ireland’s Croke Park.

Of course, locking down the venue will be easier said than done.