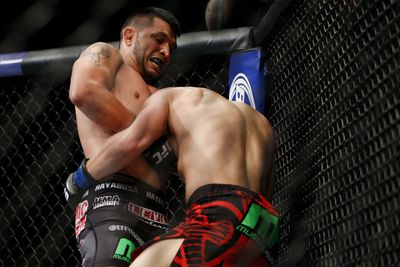 The Ultimate Fighter Latin America 2 Finale is set for Nov. 21 in Monterrey, UFC president Dana White confirmed at the UFC 188 post-fight press conference Saturday night in Mexico City. Both Kelvin Gastelum and Efrain Escudero, the two coaches on this season of the reality show, will be competing on the card.

The TUF Latin America 2 Finale will mark the UFC’s first trip to Monterrey. The organization debuted in Mexico with UFC 180 last November in Mexico. Saturday night was only the second UFC event in the boxing-crazed nation.

No bouts have been made official yet for the Monterrey card, though presumably a few will feature contestants from the second season of the show.

Alejandro Perez and Yair Rodriguez won TUF Latin America 1 in their respective weight divisions. Perez, a bantamweight, fell to Patrick Williams by first-round submission on Saturday night, while Rodriguez, a featherweight, was one of the breakout stars of UFC 188. The Chihuahua native beat Charles Rosa by split decision and earned a $50,000 Fight of the Night bonus.