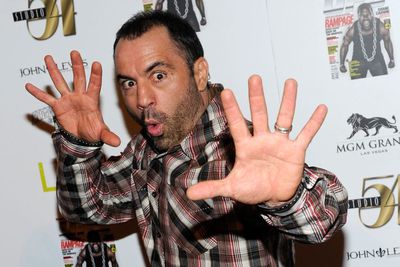 “I gotta tell you right now, that fight looked fake as fuck. There’s a couple of things I don’t like about that fight. I don’t like that clinch, that long clinch that they had where they were mouth to ear. They were mouth to each other’s ears for a long time… How about the fact that when Ken [Shamrock] did take him down he never hit him once? How about that? He never hit him! He had him down, he had him flattened out, he had his back and he’s not crashing him. He’s not blasting him with punches. He’s got him flattened out and he’s not hitting him. That doesn’t make any sense to me.”

Rogan isn’t the first mixed martial arts (MMA) observer to suggest the fight may not have necessarily been on the up-and-up, but as the color commentator for Bellator MMA’s chief rival — who is a combat sports enthusiast with 18 years of broadcasting experience under his belt — he may be the most high profile.

UFC fighter Brendan Schaub interrupted Rogan’s diatribe to remind him that Shamrock is 51 years old and suggested he may not have been capable of finishing the rear-naked choke or even ground and pounding Slice because of his age.

Rogan isn’t exactly new to conspiracy theories. The comedian and broadcaster has been known to share theories on everything from 9/11 as in inside job to chemtrails in the atmosphere to embattled UFC superstar Jon Jones being a victim of racism from white fans.

What do you think? Was Bellator 138’s main event a “work” to get Slice over or just another Roswell alien abduction?