Update: Brandon Thatch in for injured John Hathaway at UFC 189 against Gunnar Nelson 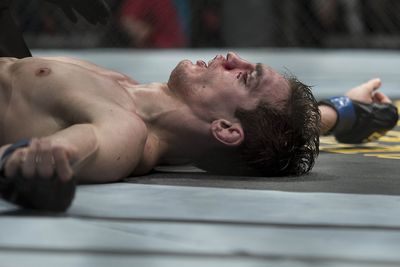 British welterweight contender John Hathaway has been forced to withdraw from his UFC 189 fight with Gunnar Nelson due to injury.

It’s been over a year since UFC welterweight contender John Hathaway stepped inside the Octagon. The 27-year-old lost to Dong Hyun Kim at The Ultimate Fighter China Finale after ‘Stun Gun’ landed a dramatic spinning elbow to KO the Brit in the third round. Before facing Kim, Hathaway was sidelined from competition for almost two years due to a string of injuries and a continuous battle with Crohn’s disease.

Unfortunately for the Longdon Shootfighter, an undisclosed injury has forced Hathaway to spend more time on the sidelines, as MMAJunkie has reported that ‘The Hitman’ has withdrawn from his clash with Gunnar Nelson. The former rugby player was scheduled for a main-card slot with Nelson on the most anticipated UFC pay-per-view of the year at UFC 189.

Hathaway emerged as a welterweight contender when he dominated UFC veteran Diego Sanchez at UFC 114 in 2010. The aspiring champion suffered a setback to Mike Pyle in his next bout but went on to string together three consecutive wins before losing to Dong Hyun Kim last year. Due to the undisclosed severity of Hathaway’s injury, it’s unknown when the 170 lbs. contender will return to action.

The UFC will now need to find a new opponent for Gunnar Nelson just two weeks before UFC 189 goes live on July 11th. Nelson will look to reestablish himself as a worthy welterweight contender after narrowly losing to Rick Story at UFC Fight Night 53 last year.

UPDATE: The UFC has announced that Brandon Thatch will be stepping up to face Nelson on short notice. Thatch was scheduled to take on John Howard at UFC 189, but has been shuffled up the card to take on Nelson. Howard will now take on Cathal Pendred on short notice.