Urijah Faber on the UFC’s deal with Reebok: ‘I’m not one to whine about it’ 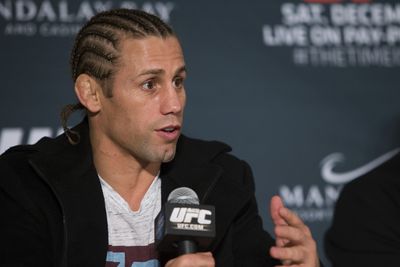 Urijah Faber likely stands to lose quite a bit in July when the UFC’s deal with Reebok goes into effect. Faber is a co-owner of Torque, a lifestyle and apparel brand that sponsors multiple MMA fighters.

In recent years, Torque has taken off and become one of the most popular brands in the sport. But with Reebok coming into the UFC, fighters will no longer be able to wear the brand in the Octagon or during any UFC-related events.

Faber, though, won’t be coming out negatively against the UFC like many of his peers have recently.

“The UFC is helping themselves out on the business side,” he told Ariel Helwani on Monday’s edition of The MMA Hour. “It’s their business. I’m not one to whine about it.”

UFC fighters across the board stand to lose money without having the ability to wear their sponsors in the Octagon. Faber’s manager Mike Roberts, of MMA Inc., told MMAFighting.com last month that 85 to 90 percent of his clients will be hurt by the Reebok deal. Fighters with one to five fights in the UFC will make just $2,500 from Reebok per fight in the tiered structure. The highest payout is $40,000 for champions.

Faber, 36, is taking a long-term mindset with Torque. He has developed relationships outside of MMA with BMX rider T.J. Lavin and others in the X Games and extreme sports community. MMA was the biggest outlet for Torque and Faber said it will continue to sponsor fighters outside the cage.

“I think we have a bright future,” Faber said. “Our gear is looking better and better every new batch of designs is awesome. There’s the school uniform and what you throw on after school. That’s kind of the way I approach it.

“You got the blue slacks and you got the board shorts when you get out of school.”

UFC bantamweight champion T.J. Dillashaw and Joseph Benavidez, Faber’s teammates at Team Alpha Male, have both left MMA Inc. in the wake of the Reebok uniform partnership. Benavidez told MMAFighting.com that the management firm was no longer benefiting him and that he’ll actually be making more money once the Reebok contract goes into effect.

“I felt like I could do it myself, and at this point in my career, save some money,” Benavidez said before his UFC 187 win over John Moraga last month. “I think managers are definitely gonna have to change their business model a little bit. For one, they’re gonna have to step up outside [the cage]. It’s not going to be as easy as, ‘Hey, be on the banner and pay us money,’ because that’s easy to do.”

Faber said the decision to depart by Dillashaw and Benavidez has no affect on their relationship or their standing with Team Alpha Male. It’s just business. However, Faber doesn’t think they should be self-managed for long.

“It’s not a good thing to be managing yourself in this sport,” he said. “As much as we’re buddies sometimes with the UFC folks, it’s good to have people looking out for you, people to bounce things off of. They still have that with me.”

Faber has been a pro MMA fighter since 2003. He’s a former WEC featherweight champion and still one of the most popular lighter weight fighters in the world. He’s seen a lot of things during his 12-year career. “The California Kid” knows the sport seems to always be in flux.

“The changing landscape of MMA is such an interesting thing,” he said. “Every month there’s a new rule or something new in place.”