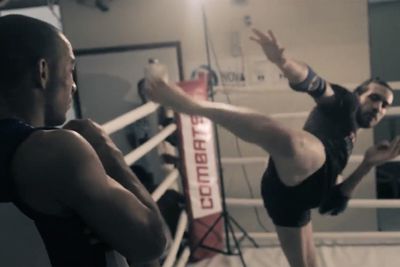 He not only emulates the kicks and fighting style of Conor McGregor, Jonas Bilharinho apparently also talks smack while sparring with Jose Aldo.

A decorated Karateka and undefeated Jungle Fight champ in Jonas Bilharinho was brought into Jose Aldo’s fight camp to help mimic Conor McGregor’s unorthodox style of striking. While he did a good job emulating McGregor’s kicks (video here) apparently that’s not the only thing he tried to mimic.

According to Bilharinho, he also talked smack to Aldo during sparring sessions to help him get used to McGregor’s mind games.

“(I talked trash) a lot. A lot. Never ever ever did anyone try to talk to Aldo during fights, and I am 100% sure that Conor will,” Bilharinho said. “He’s going to try to make Aldo’s good strikes look foolish. So every single leg kick that Aldo gets (on me), every punch, every good strike, I tell Aldo, ‘No Aldo, you’ve got nothing. What do you got for me, Aldo?'”

“I was talking to Aldo during training and he lost his mind! He lost his mind, and I said to him ‘man, you’ve got to focus, you’ve got to concentrate’,” he said. “But his evolution is absurd. Every single training, he’s a monster. Now he doesn’t lose focus at all when I’m cursing at him. Now I can curse his mother, and he will do nothing. He will keep calm and stick with the strategy. He’s a beast.”

It’s a good sign that they’re working to deal even with relatively minor things such as smack talk. While he says Aldo has gotten used to it by now, I’m not quite sure what to think about him ‘losing his mind’ against someone he doesn’t even despite.

Betting odds almost have it even with Aldo currently a slight -117 favorite against McGregor.