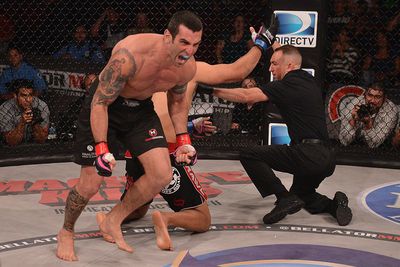 Out of Bellator for over a year with an ACL injury, Vinicius Queiroz is finally cleared to get back in action.

The Brazilian heavyweight, who stopped Lavar Johnson in 23 seconds at Bellator 102 in 2013, told MMAFighting.com he expects to be back in action in late August or early September, and feels better than ever after the long layoff.

“I fought without my knees since my UFC fight,” Queiroz said. “I couldn’t clinch or throw kicks, so I’m motivated to finally being back.”

Queiroz was scheduled to meet UFC veteran Cheick Kongo at Bellator 106 in November of 2013, but was sidelined with a severe knee injury. “Spartan” underwent surgery in both knees after that, and had no rush getting back in action.

“I’ve been through situations like this throughout my entire career, like getting cut by the UFC. At that time, I thought that was the worst thing in the world, and now I see how good that was for my career,” he said. “When I got hurt before the Kongo fight, I focused on my recovery only. No rush at all. Now I have two knees.”

Queiroz will leave Rio de Janeiro’s Team Nogueira in June, and is travelling to the United States to visit three gyms to decide when he’s going to train for his next fights. The 6-foot-7, 236-pound Brazilian predicts he will be the Bellator heavyweight champion by the end of the year.

“I will be the champion,” he said. “Bellator respects me. They know I will go there and fight anyone. I believe I can be the heavyweight champion by December.”

“Spartan” has no fight booked yet, but would welcome heavyweight bouts against Bobby Lashley or “King Mo” Lawal, who recently moved up from light heavyweight to fight Kongo.

“Bellator is growing a lot, hiring new names, but the heavyweight division is complicated,” he said. “Alexander Volkov lost to Tony Johnson, who isn’t ranked. Bobby Lashley and James Thompson are popular names, but aren’t ready to beat Vitaly Minakov yet. They don’t have many top ranked heavyweights, so I believe a win could be enough for me to fight for the title.

“I don’t know if they would give me Lashley right away because he’s winning fights and I haven’t fought in a while, but I believe it would be a good fight. He doesn’t like to stand and bang, and he would do me a favor by taking me to the ground. He’s short for the heavyweight division, and he’s not that heavy. It would be a good fight for me. Or maybe ‘King Mo’ Lawal, who just fought at heavyweight. I don’t pick opponents, but those guys would be good options.”