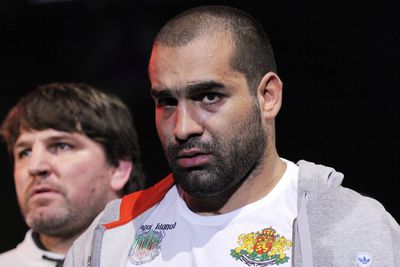 Blagoi Ivanov is scheduled to fight for the WSOF heavyweight title Friday night in Edmonton, Alberta, Canada, however, he has yet to officially weigh-in.

According to a WSOF official, Ivanov, who currently lives in Las Vegas, was originally supposed to fly to Edmonton on Tuesday, however, he only received his work visa Thursday. After receiving the visa, he took the first flight out to Edmonton and landed Thursday night, hours after the weigh-ins had already ended. His opponent, WSOF heavyweight champion Smealinho Rama, weighed 227.8 pounds.

Ivanov is now scheduled to weigh-in at 6:30 p.m. ET, which is an hour before WSOF 21 is scheduled to start. WSOF believes he currently weighs approximately 245 pounds, so they are confident he will be cleared to fight. The promotion could not answer why the weigh-in will be taking place so close to the start of the show, and the Edmonton Combative Sports Commission wasn’t available when MMAFighting.com called them Friday morning.

Veteran Canadian fighter Tim Hague wrote on Facebook Thursday night that he was contacted to potentially replace Ivanov, but that offered was rescinded once it was clear Ivanov would be able to fly to Edmonton.

Rama vs. Ivanov for the WSOF heavyweight title will serve as the co-main event on tonight’s WSOF 21 card, with Lance Palmer vs. Chris Horodecki for the WSOF featherweight title the headlining act. And this isn’t the only unique story playing out prior to this event. On Thursday, MMAFighting.com reported that two teammates and roommates agreed to fight on the eve of the show.